Start-Ups and established Enterprises on the verge of hiring an offshore developers team have a list of nations to turn to meet their requirements. Many IT talent hubs are reliable, close to your time zones, match your cultural nuances, and may have other commonalities. But do they fare as well as the Indian IT team in programming, budget, and cultural standards?

India has always been the crème de la crème of offshore hiring. According to Statista, India was considered the most attractive destination for offshore business services in 2021, owing to its financial attractiveness and availability of staff and skills, scoring 2.83 and 2.18. Let’s dive into other reasons why India is reinforcing its presence in the global software outsourcing space.

Today hiring developers offshore without substantial screening can prove disastrous for your project. There have been companies that regretted hiring developers for important projects without vetting them for their stated skills and noticed the disparity too late. Some even paid the price when these developers abandoned the project midway or stole all the ideas and Intellectual Property (IP).

Connecting with these candidates was strenuous and unpredictable. They were either incommunicado or available after work hours, making it hard to coordinate. Some even missed or skipped milestones or deviated from the objectives and delivered code with Quality issues or an output that barely approximated the specifications – hurting release dates.

Data theft, inability to meet quality benchmarks, poor communication, lack of passion, and in some instances, fraudulent profiles and demanding renegotiations caused organizations to take a good hard look at their hiring protocols. Companies realized that there is a lot on the line, and risking a sensitive large-scale project to save a few quid is not worth it.

They were seeking a reliable path to hiring trustworthy and quality developers. It meant going through reputed nations, countries with a solid reputation, large talent base, proven competency, and an economically strong and politically-backed IT structure. One such destination was India!

Why is India Considered one of the Best IT Outsourcing Destinations? 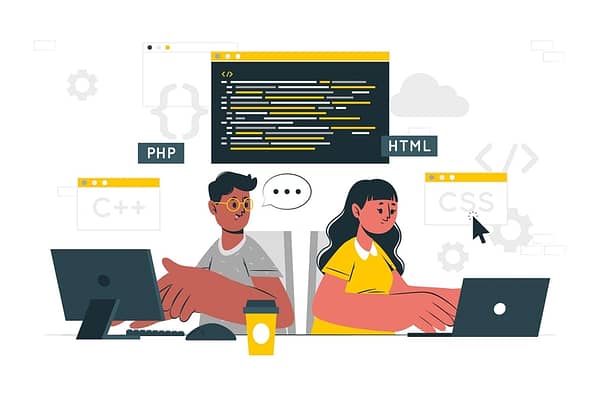 1. Talent Pool: According to NASSCOM, the tech talent demand and supply gap are the lowest in India; it stands at 21.1%. Furthermore, India’s tech talent pool stands at 3.8 million in 2021 and produces around 2.14 million STEM graduates yearly. Aside from this, India continues to train and reskill its developer base to cope with the ever-changing market demands. All this data further underlines why associating with India would mean that you’ll never be short of skilled and talented developers.

2. Technical Expertise: Indian programmers are proficient in Data Structures and Algorithms, Text Editors such as Notepad++, Sublime Text, etc., and Databases such as PostgreSQL, MongoDB, Cassandra, and more. Furthermore, they are familiar with various popular programming languages like C, C++, C#, HTML, CSS, Java, Python, R, etc., Source Control Management, competent in most operating systems like Windows, iOS, Linux, Android, etc. They are well-versed in unit, integration, stress, and system testing. Also, they work well with analytical tools like Tableau, Excel, and more, besides knowing the ins and outs of the Software Development Life Cycle (SDLC).

3. English Competency: Exchanging technical instructions and passing out requirements requires a good knowledge of English. Any misunderstanding could create delays, risk your reputation, and jeopardize the project. Fortunately, many Indians receive their core education through CBSE-certified schools in English. Even in University, they are taught all the concepts and terminology in English.

The ability of Indian developers to grasp UK, US, and other English accents and dialects is another added advantage. The seamless and cost-effective internet connectivity acts as a bridge to the flourishing English content online. This increases their exposure to rich English content, further reinforcing their diction, slang, and overall language quality.

4. Cost-Effective: According to Upgrad, Mid-level Full Stack developers, System Software Developers, QA Engineers, and Application Software Developers make somewhere around $17,000, $15,000, $8,00, and $10,900 respectively, considerably lower than their counterparts in the United States and the United Kingdom. Businesses can hire a brilliant pool of developers without denting their cash flow.

If developers cost less, expect the project expenses to come out in the lower figures. Lower costs allow Small to Medium businesses with a tight budget to recruit developers from India. Hiring developers domestically isn’t economically viable. According to Kinsta, on average, web developers, front-end developers, and backend developers make around $68,524, 76,929, and 101,619 in the US.

5. Availability, Flexibility, and Attitude: Indian developers are available, responsive, willing to accommodate immediate needs, and present a positive outlook in the face of growing challenges. Employers value these attributes. When projects get tough and require break-neck, last-minute, and late-night availability, it’s the Indian developers who step up and deliver without any qualms.

Reliable developers whom you can bank on can make a significant difference. Your website could witness a traffic spike, plugin conflicts, or disrupted checkouts. The mobile application sees extended downtime or could go through any other breaking-point crisis. In this hour, you’ll always have hard-working, willing, and passionate Indian developers to turn to, and that too round-the-clock.

6. Quality: Indian developers don’t cut corners. They deliver excellence at every phase, from discovery to production. These developers adhere to security, design, QA, UX, performance, and all the other aspects to release the project as per the client’s specifications. Certified by reputed Institutions, these developers are highly-skilled and pack a sound understanding, which reflects in their work.

From Support to maintenance, prototyping, testing, wireframing, custom coding, and more, the superior Indian programmers stand out and deliver the best output for your investment and time. Once Indian developers take over a project, rest assured they’ll meet the quality benchmarks, nail the right coding standards, and guarantee professionalism on all other fronts.

7. Global Industry Expertise: Indian developers have worked across the board with thought leaders and pioneers of marquee clients in different verticals and business types. Their in-depth insight into the subliminal pain points of various industries helps them guide businesses toward the right solutions and technologies that guarantee success. They have also served as consultants and advisors for many companies.

Indian developers have helped integrate critical technologies, simplify business processes, maximize savings, and elevate the customer experience globally. This gives them the edge from the wealth of knowledge they have accumulated versus developers in other nations who stay restricted to the regional or national level. The granular understanding enables an accelerated start on projects due to Indian experts having a ton of knowledge, making it easier to grasp problems faster.

The practice of hiring remote workers is here to stay. According to Fortunly, about 51% of technology executives outsource application and software maintenance. Companies aren’t shying away; they have only become a little stringent in where they invest their dollars. After careful investigation, they chose India as a valuable and reliable offshore hub for all their programming needs.

Planning a base for your development team in India means landing a certified and dependable ally to steer your development projects. Fortunately, BorderlessMind has the most trustworthy, cost-effective, pre-vetted, and skilled dynamic developers. Our talent base with end-to-end exposure to all verticals can capture your vision, meet your business goals, and deliver the project on time.

« Why Hiring a Full Stack Developer Proficient in React & NodeJs can Prove to be a Deadly Combination for Your Business·What is Quiet Firing? 6 Signs You Are Being “Quiet Fired” From Your Job »

This website uses cookies to improve your experience while you navigate through the website. Out of these, the cookies that are categorized as necessary are stored on your browser as they are essential for the working of basic functionalities of the website. We also use third-party cookies that help us analyze and understand how you use this website. These cookies will be stored in your browser only with your consent. You also have the option to opt-out of these cookies. But opting out of some of these cookies may affect your browsing experience.
Necessary Always Enabled
Necessary cookies are absolutely essential for the website to function properly. This category only includes cookies that ensures basic functionalities and security features of the website. These cookies do not store any personal information.
Non-necessary
Any cookies that may not be particularly necessary for the website to function and is used specifically to collect user personal data via analytics, ads, other embedded contents are termed as non-necessary cookies. It is mandatory to procure user consent prior to running these cookies on your website.
SAVE & ACCEPT
Help Desk Software