The great resignation that emerged in 2020 hadn’t slowed down much; despite losing momentum in mid-2021, the trend was still in full swing coming into 2022. Employees were confidently exiting the labor market for greener pastures or seeking work-life balance. According to CNBC, around 4.4 million people voluntarily left their jobs in March.

It wasn’t showing any signs of leveling off till the brisk economic changes fueled the fear of an impending recession. Inflation clinging to a 40-year high has triggered sheer panic in the corporate sector. Employees are holding on to their jobs, and freelancers, seeing a bleak future, are gravitating towards a more promising payday – a secure and stable job. But is it worth hiring these moonlighters?

Let’s look at the story of freelancing how it unfolded:

The IT sector boomed dramatically while most others doomed

During the pandemic, supply chains weakened, mainly because offline channels got disrupted. The COVID disruption led to logistical bottlenecks, labor disparity, and product shortages. Businesses operated remotely and depended on online mediums to sell their goods or services. Coordinating with employees and customers required a significant overhaul in their IT infrastructure. Automation had to replace manual, error-ridden, and time-intensive laborious tasks.

The need for IT resources steamrolled

At this hour, the need for IT talent was at an all-time high. The IT unit in every business saw significant changes, investments streamed in, and upgrades started happening on all levels. Successfully integrating newer capabilities required knowledgeable resources. Some small-to-midsize organizations even touched near bankruptcy from the pandemic pressure due to their inability to expand their IT team on time.

The need for IT resources created a landscape where there was an acute shortage of highly-skilled talent. Nearly every business wanted IT experts in multiple roles to survive and sustain their business in the digital-dominant environment. From development to design, migration, maintenance, and more, tech professionals became the most sought-after roles. To hasten tech investments, companies all over went on a massive hiring spree to code, design, and deploy their tech solutions. 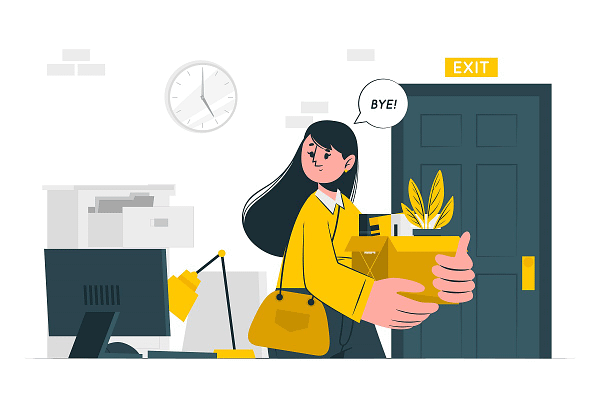 The Great Resignation hit the US economy. What started during the pandemic peaked in 2021 and triggered resignations from a record-breaking number of employees. In December 2021, according to BLS, around 4.3 million Americans quit their jobs. Almost all industries witnessed an unprecedented mass exit.

The limited availability of resources meant businesses now had to explore other options. When staffing agencies couldn’t fulfill the demand, the internal HR teams turned to gig platforms for freelancers. The lack of Full-Time Employees (FTEs) and growing uncertainty in the market about further restrictions meant they had to hire fast. Freelancers came to the rescue and managed & stabilized the IT workload flawlessly.

The rise and rise of Freelancing

FTEs gave up the traditional 9-to-5 roles to switch to full-time freelancing work. In 2020, according to Statista, a whopping 67.6 million Americans were freelancing – the quit led to a boom in freelancing. Greater freedom, mobility, and autonomy meant freelancing was more lucrative than a stable job. Freelancers started seeking new avenues more aligned with their priorities to grow their capital.

The remote nature of freelancing and the more flexible work arrangement made workers pick freelancing full-time. According to Upwork, over 34% of workers were dissatisfied with the whole return to office model after the economy opened recently. Close to 18% of them even expressed their desire to consider self-employment.

There was no end to freelancing – almost every next employee wanted to freelance. The active freelancers even exploited their integral positions in various projects to renegotiate rates, some jumped ships, others undelivered, and the rest abandoned pivotal projects midway. The luxury of finding another employer was too good. But all this was to fizzle out soon!

And the bust… Freelancing loses spark – the sheen fizzles out

The temporary distortion in the market where freelancing started to seem more lucrative started losing appeal. The stock market crisis, enormous tax increases, and the trillion-dollar stimulation grants led to more money in the market, igniting inflation and causing panic. Gig workers no longer seemed comforted by their side hustle.

Freelancers realized that the ongoing moonlighting with multiple organizations on several odd projects isn’t as concrete as it seems at face value. The slipping economy could jeopardize these arrangements, and their positions will be at stake during lay-offs. In this hour, a firm job with a marquee organization with several other benefits may be a better trade-off to withstand a recession blow.

A full-time job solidifies your position, especially as an asset if you make yourself indispensable to the business. The security that comes with a steady Corporate job leaves less room to worry about mortgages, EMIs, and other dreaded expenses. A depreciating market in the wake of the Great Recession means it would be wiser to revert to that permanent job.

Where do freelancers stand today?

In the layoff scenario that emerges as a result of the recession, temporary workers could be the most vulnerable. Their detachment from a business, disconnect with the internal culture, and lack of benefits like health and severance coverage, meaning, these freelancers are easier to strike off than their peers. Freelancers, as things stand, are judiciously weighing the risks and rewards of a perpetual side job life and wanting to cross over to a permanent job.

The great resignation may have receded in recent months due to the fragile economy, but the openings created from the earlier walk-outs are still in place. Freelancers want to cash in on this limited-time opportunity to return to full-time roles. The rising interest rates and energy price rise would otherwise burn a hole, making financial recovery hard and possibly tipping their accounts into a negative.

• Freelancing seemed lucrative, but the above scenario weakens that safety net
• Forget flexibility; gig workers fear they may not have any projects – feel less empowered
• As per the labor department, job openings are nearly 11.3 million in May
• Freelancers want to use the current openings window to return to a full-time role ASAP

The Risks of Accepting a Freelancer into your Workplace

Already committed elsewhere: These freelancers may still have a contract with the earlier client. Their habitual tendency to take more than they can chew means they are committed to other projects on the side for more money. Employees moonlighting on the side is pretty common. They don’t value loyalty, aren’t invested in the organization’s vision, and generally stick to monetary goals, meaning they continue to chase projects even after working hours.

Refuse to communicate post-work: Employees might still be available for some after-hour, last-minute tasks. However, employees moonlighting are unlikely to do so. They will be unreachable when you need them the most. Seeing as they are invested in a side gig, even if they take up extra work, they will only finish it off the next day in the office. Plus, these workers aren’t as proactive. Don’t expect one of them to volunteer for additional duties.

Intellectual property risks: The confidential data exchanged within your organization could potentially end up with your competitor. The last thing you want is an ingenious idea, tool, or application selling on the market. You can’t trust unreliable freelancers, turned full-time workers, to hold on to your classified information. If they are managing another project on the side, expect them to reuse your code block and other data assets for them.

Fraudulent Identity and Skillset: Despite clearing preliminary tests and interview rounds, your freelancer comes across as dishonest. The ratings, testimonials, and portfolio doesn’t sync with their performance and overall quality, but before you realize it’s too late. The daily performance reports, concerns raised by managers, conflicts with clients, and disagreements with peers are the red flags that make organizations want to reconsider the employment offer.

The likelihood of getting cut off from volatile projects and not having a backup in this unpredictable climate makes freelancers seek a full-time career. The recent walkouts are slowly subsiding; the probable recession has led to workers returning and some even picking up semi-decent jobs. Amidst this chaos and economic meltdown, freelancers want to seize a steady job.

But the one thing we have learned from freelancers is that they may not be trustworthy long-term allies. It’s likely that post-hiring, these moonlighters will revert to double-timing and side-hustles – not quite the commitment you expect. But there is someone you can bank on, BorderlessMind. Our trustworthy pre-vetted resources are only locked and reserved for your projects – no side jobs.

« Moonlighting, Dual Employment Keeping IT Employers on Toes. 6 Ways You Can Keep the Double-Dippers in Check!·Which Databases are Best for Mobile Apps in 2022? »