Since its inception in 2010 to counter the limitations of the Apache HTTP Server, Node.js has come a long way. Today, Node.js exists as an event-driven, fast, light-weight, single-threaded, and open-source platform for building fast web servers in JavaScript. It runs on Google’s V8 JavaScript engine and relies on a non-blocking I/O architecture to develop quick, efficient, and scalable applications.

The non-blocking functions alongside the single-threaded nature supported by the library make Node.js perfect for developing enterprise-grade real-time applications running parallel connections. Fewer threads reduce complexity, consume minimal memory, and ensure faster execution of tasks. Given these advantages, where can we use Node.js? Let’s take a look.

What is Node.js used for?

Node.js is used to create dynamic page content that must load fast and rapidly respond to user interactions. The ability to eliminate the waiting cycle through single-threaded, asynchronous, non-blocking programming and proceed to the subsequent request makes it suitable for I/O-heavy workloads requiring an immediate response. This characteristic makes Node.js best for building fast network apps.

The efficiency of Node.js means you won’t have to worry about dead-locking. It removes the need to have a blocking call at the start of the event loop. Post executing the input script, Node.js enters the event loop and exits it when there are no more callbacks to perform. The asynchronous nature, utilizing fewer threads, resulting in fewer resources or memory, makes it best for faster task execution.

Real-time applications with a vast number of simultaneous connections can cause delays, something that Node.js can handle with its high throughput. The single-threaded nature of Node.js, using non-blocking I/O calls, allows it to support thousands of concurrent connections in the event loop. This leads to fast and efficient apps that deliver a more intuitive customer experience.

• Node.js is best for developing scalable and high-speed applications
• Apps that require high performance when under too many requests
• When you want to reduce latency and respond to an event swiftly
• When you wish to improve developer productivity and reduce development costs
• To reduce time to market through the high number of packages, libraries, registries, and tools

7 Different Areas Where Node.js is Used? 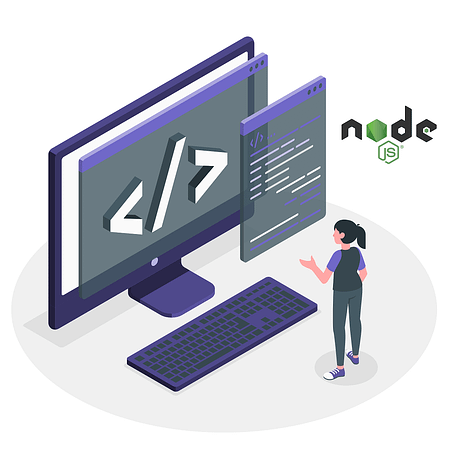 1. Chatbots: The non-blocking thread execution characteristic of Node.js makes it fast and efficient for chatbots that require near-instantaneous communication with users. The single-threaded nature of Node.js, being event-driven, maintaining fluidity, and handling several concurrent connections, is highly reliable for real-time communication.

The Event loop and WebSockets in Node.js make it possible to transmit bulk messages quickly without significant delays. The asynchronous nature and ability to manage hefty input-output processes make it possible for Node.js to maintain high performance and optimum user experience in a bi-directional and event-based scenario between the server and browser.

2. Internet of Things (IoT): As per Statista, the number of IoT devices will rise to 29.4 billion, and facilitating this booming market requires Node.js due to its ability to handle massive data flows. IoT devices programmed through Node.js execute tasks much faster, leading to better performance. The briskly changing data streams flowing in real-time need a system that can keep up.

The ability to hold simultaneous connections makes Node.js scalable and resource-efficient. Outside of this, the ease of building APIs, secure authentication, secure HTTP requests, and the ability to easily integrate with the MQTT protocol, usually used by IoT apps, make Node.js the most reliable choice when it comes to anything related to IoT.

The ability to process the avalanche of simultaneous requests from thousands of devices on the network doesn’t block the Node.js web servers. Mainly due to its event-driven architecture and asynchronous processing suitable for I/O-heavy operation without diminishing the performance. Node.js acts as an application layer between the devices and databases used for storing data.

3. Data Streaming apps: Sending a large volume of data, like in the case of audio and video applications, can induce a lot of delays. But with Node.js, it is entirely possible to circumvent this problem. Seeing as the purpose here is to make the content accessible to the end-user immediately, you require a solution that can process and respond fast, something Node.js can handle.

Node.js comes with independent modules that allow it to process smaller chunks of data sequentially while keeping the connection open to update the remaining components when needed. The end-user won’t need to store or cache the data in memory temporarily. In essence, Node.js can cope with the demanding nature of streaming data, right when it gets uploaded.

4. Collaboration Tools: Collaboration tools require a fast exchange of information. In case of any delay, the user experience goes for a toss. Slack, Trello, and Google Docs are all collaboration tools that rely on Node.js to ensure optimum performance. The asynchronous and event-based architecture coupled with Event API and Web Sockets ensures the heavy I/O operations don’t hang the server.

Node.js ensures all the data and server-side events are returned to the client on time. The numerous events and I/O requests co-occurring don’t delay the changes on the client-side. The Node.js ecosystem will instantly update the collaboration interface so that all users see the changes right away. The event-driven and non-blocking nature keeps the collaboration space up to date.

• Great fit for co-working applications requiring immediate changes and updates
• Non-blocking API helps to handle lots of simultaneous connections
• No need to wait for the database query; pick up the next task in que
• Multiple users can comment, edit, post messages, and attach media

5. Single-page Applications (SPA): The purpose here is to fit an entire application on a single page, plus ensure an outstanding user experience, similar to desktop apps. SPAs are best suited for Node.js, considering their ability to handle data-heavy workloads and asynchronous calls without the need to refresh the page. Social tools and mail solutions are the best examples of SPA’s build on Node.js.

Single Page Applications will need to run JavaScript at some point, and using Node.js enables fewer context switches while also allowing server-rendering of SPAs, complementing and providing a massive boost for client-side JavaScript. The event-driven and Non-Blocking I/O asynchronous functionality on top of Chrome V8 makes it perfect for real-time data-intensive applications.

• Simplifies coding experience – easy code sharing between the frontend and backend
• Node.js is better at handling concurrent requests and much faster
• The asynchronous event loop characteristic of Node.js is best suited for SPAs
• CPU-intensive tasks run in the background without obstructing the main event loop

6. Browser Games: Node.js is equally proficient at handling the complexity required in browser-based games. Node.js developers will use Socket.IO library, Express.js framework, and HTML5 to create games that run directly in the browser. Additionally, it doesn’t require installing any 3rd Party plugins, such as Flash or Shockwave, to create impressive gamification experiences in browsers.

The real-time interaction, data-heavy workloads, and asynchronous call capabilities within Node.js make it suitable for developing multi-player browser games that require rapid, time-intensive, and bi-directional communication between the client and server. Node.js serves as the groundwork for the game’s back-end, reducing delays and making the gaming experience as immersive as possible.

7. Microservices: The newer apps have started to rely on microservices to respond to changes – deviating away from the monolithic and single-tiered model. In the older model, staying flexible and attaining scalability was hard. You couldn’t achieve continuous deployment or build features concurrently. This is where microservices play a vital role, and to develop these microservices; you require Node.js.

Microservices architecture means every feature communicating through the REST API will work independently, and that makes it easier to debug whenever a fault emerges. Unlike monolithic apps, microservices are scalable – you can easily develop extra features. For all the stated reasons, Node.js is the best choice.

Node.js, with its event-driven architecture, enables efficient, cost-effective, and real-time application development. The asynchronous and single-threading capabilities in Node.js enable a non-blocking mechanism. Developers get to build microservices with an uninterrupted flow, with the Node.js being fast and easy to maintain.

• Event looping means the server uses a non-blocking mechanism to respond
• Data is released in chunks; no buffering is involved
• Codes get executed fast on the V8 JavaScript Engine
• Node.js libraries move to the following API and don’t wait for data from the last API

Major brands like Netflix, Uber, and LinkedIn have already entrusted the scalable and fast-performing Node.js to handle the data-heavy real-time interactions and streaming on their platforms. The ecosystem of Node.js, with its single-threaded nature, ability to callback, run the same language client-side and server-side, and other positives, make it the most reliable tech stack.

However, you would also require competent Node.js developers to understand the task at hand and execute it to perfection. A reliable, affordable, and experienced development team will bring your project requirements to life. Hire node.js developers from BorderlessMind to complete the project on par with your expectations and within the stipulated time.

This website uses cookies to improve your experience while you navigate through the website. Out of these, the cookies that are categorized as necessary are stored on your browser as they are essential for the working of basic functionalities of the website. We also use third-party cookies that help us analyze and understand how you use this website. These cookies will be stored in your browser only with your consent. You also have the option to opt-out of these cookies. But opting out of some of these cookies may affect your browsing experience.
Necessary Always Enabled
Necessary cookies are absolutely essential for the website to function properly. This category only includes cookies that ensures basic functionalities and security features of the website. These cookies do not store any personal information.
Non-necessary
Any cookies that may not be particularly necessary for the website to function and is used specifically to collect user personal data via analytics, ads, other embedded contents are termed as non-necessary cookies. It is mandatory to procure user consent prior to running these cookies on your website.
SAVE & ACCEPT
Help Desk Software