A specialized developer with astute expertise in an area will know its intricate details inside-out. A Full Stack developer can handle both frontend and backend but doesn’t specialize in either. As an organization looking to hire in-house or remote developers, you need the best understanding of both. Read through the write-up, review the pros and cons of each, and learn which one serves you best.

Specialized developers: Specialized developers have mastered one discipline really well. Their focus on one area has led them to acquire a high level of comprehensive expertise and exposure in either frontend or backend development of a website or an application. They have extensive knowledge because they have trained and specialized in that specific stack their entire career.

Full Stack developers: Full Stack developers know all about the frontend and the backend. This is a resource a business can utilize to handle both sides of a website or a native application. In essence, such developers can manage the functionality and cosmetic side of things. For their diverse skillsets, they are high in demand in most industries.

They also possess a high level of Database knowledge around MySQL, Firebase, MongoDB, PostgreSQL, etc., Quality Analysis (QA), and software testing with Selenium, Katalon studio, and Postman; these developers have an extensive skill set. They are also fluent with servers, networks, and hosting.

Listed below are the top arguments for hiring a Specialized developer and the reasons that make a Full Stack developer not so preferable:

1. Familiarity with Latest Trends: Unlike Specialized developers, Full Stack developers have a lot on their plate; therefore, they don’t get the time to keep up with the latest trends and technologies. They aren’t as committed to updating the knowledge, and might not know as much about the latest marketing techniques to boost user experience. Specialized developers work way harder towards upskilling and acquiring more knowledge around the nitty-gritty of their specific stack. 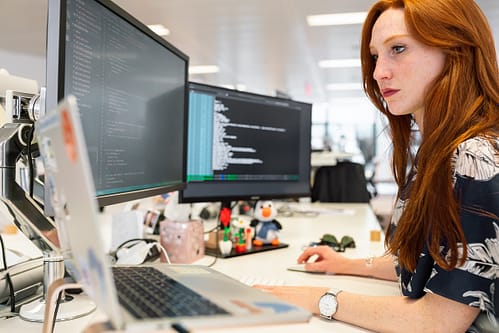 4. Ease of hiring: A Full Stack is expected to know both the frontend and backend equally well. Not many developers can specialize and dedicate themselves to mastering technologies on either side. You are less likely to come across qualified and experienced Full Stack developers, which is why most firms prefer to opt for specialized developers, much more effortless to hire.

Listed below are the top arguments for hiring a Full Stack developer and the reasons that make a Specialized developer not so preferable:

1. Management and Coordination: Seeing as a Full Stack developer handles both the frontend and backend, the level of coordination with outside teams is close to zero. Full Stack developers take complete ownership of the project – they own every little aspect from start to finish. Unlike with Specialized developers, the dependencies on other team members to fulfill tasks comes down heavily.

3. Flexibility: Full Stack developers have complete visibility of the frontend and the backend of a project. This makes it easier for them to stay agile and flexible through the project course and attend to areas on will. Essentially, they can switch to either side depending on their current priority. Specialized developers can only focus on their side of things.

4. Know it all: A Full Stack developer is essentially a Jack of all trades. A Full Stack developer knows his frontend just as well as the backend. Being able to handle tasks on both sides makes them the ideal choice for projects that require modifications on both ends. Their expertise in various areas makes them more capable of handling a project of that magnitude. A specialized developer can only address one end.

When to hire offshore Specialized Developers?

1. Quality: Any shortcomings where the final project deviates from the pre-decided specifications will not go down well with your clientele. In contrast, quality projects that exceed expectations usually result in a higher Customer Lifetime Value (CLV). If you want a glitch-free deployment and run, hire sophisticated and domain-specific Specialized developers to handle the task. The quality will mostly come out superior when working with Specialized developers.

3. Complexity: If the project roadmap looks challenging, instead of entrusting a single Full Stack developer with all the responsibilities, go with a specialized developer for both frontend and backend. Certain complex tasks can be time and cost-intensive. Thus, letting a single resource handle both ends may not be the most intelligent approach.

Plus, most projects run into hurdles that require proper attention. A Full Stack developer pre-occupied with either of the two ends will find it hard to resolve the issue on one side without burning time on the other end. A high workload with a bunch of unresolved problems can lead to the project crossing the deadline – resulting in fines and ruined client relationships.

4. Time Constraint: Whether you go with Agile, Waterfall, Scrum, or any other project methodology, time is the one factor you can’t overlook. For a project cycle that runs past its due date, time to market will be longer, and a delayed deployment can affect your chances of capitalizing on a sudden market opportunity. This is why assigning the right resources is essential.

1. Size of Project: If it’s a smaller project, a single Full Stack developer can handle both frontend and backend simultaneously. But, let’s say you are working on a transactional website or an application with hundreds of customers, numerous products, multiple pages, etc., then it would be best to split the task between two Specialized developers.

3. Possibility of Iterations: There will be projects that start as something with the milestones changing on the go. Here’s when Full Stack developers can help. They can multi-task, cope with changes, and subsequent modifications to either side. Ensuring optimum quality on the frontend and backend with varying objectives can be demanding, but a Full Stack can get it done faster.

However, if all the changes are likely to happen in one area, opt for a Specialized developer. But, remember that Specialized developers are not as flexible or accustomed to finishing last-minute requests, handling shorter timelines, or helping clients with disruptions. In contrast, flexibility is a critical advantage of depending on a Full Stack developer. Plus, they can work on either side as need be.

Hiring offshore Full Stack developers or Specialized developers can get confusing. The right hero for your project will ultimately be the one that adapts to your needs, multi-tasks, communicates flawlessly, fixes the issues, and closes the project on time. Whether it ends up being a Full stack developer or a Specialized one depends on many variables. Focus more on getting trustworthy and talented remote developers.

If you are unsure about who to go with, get in touch with us. Our experts and analysts will assess your unique requirements to match you with the best talent. Our unique methodology and staffing framework will select the best offshore frontend developers, offshore backend developers, or offshore Full stack developers as per your project complexity, scope, time, and other parameters.

« How to Keep Your Remote Employees Safe from Potential Cyber Threats?·6 Skills that Start-up Founders Expect from Offshore Developers »